The Elements of Producing

with... Miguel Faus on CALLADITA

This past March, Miguel Faus will continue his quest as a pioneer in the Web 3.0 and filmmaking space. A talented and commanding director, who is taking his short film CALLADITA...

This March, Miguel Faus will continue his quest as a pioneer in the Web 3.0 and filmmaking space. A talented and commanding director, who is taking his short film CALLADITA and converting it into NFTs in hopes of raising over $1 Million USD to finance his feature film.

If the previous sentences were gibberish, to you, let’s start at the beginning.

Web 2.0 and Web 3.0 represent successive, advanced iterations of the original Web 1.0 of the 1990s and early 2000s.[Geosite blogs] Web 2.0 is the current version of the web with which we are all familiar [Social Media, Streaming, etc], while Web 3.0 represents its next phase that will be decentralized, open, and of greater utility.

Innovations such as smartphones, mobile Internet access, and social networks have driven the exponential growth of Web 2.0.

Web 2.0 has been a disruption among sectors that fail to integrate the new web-based business model. Defining features of Web 3.0 include decentralization; trustless and permissionless; artificial intelligence (AI) and machine learning; and connectivity and ubiquity.

Fair warning, this is my best attempt to explain it My own personal metaphor for all this (Web 1.0 - 3.0) when applying it to movies is as follows:

Seriously watch it now, this will be here waiting for you. His command of the frame, production design, authentic pov, and more shows his craftsmanship.

So Miguel has this great finished project that won some awards and did fantastic on the festival circuit. But should that be the end of this great story?

No, it shouldn’t, because he has a vision for a more expansive, authoritative story. However, now comes the toughest part— how to raise the funds for a feature.

We have designed an innovative NFT drop to raise the funds needed to make Calladita. The entirety of the proceeds from the NFTs will go towards the budget of the film: locations, equipment rentals, cast & crew, travel & accommodation expenses, post-production...

We believe that web 3.0 has the potential to bring a new wave of decentralization and democratization to cinema, one of the art forms where gatekeepers and corporations still hold most of the power. If you believe in a future where audiences can choose what movies they want to see being made, support the filmmakers who are making those films, and get awesome NFTs for their contributions which allow them to participate in their success, then join us on this incredible journey.

We are super excited to involve the community in the making of this film, and hopefully together we can lead this revolution so that many more filmmakers across the globe can make the films they dream to make. Our roadmap is simple: we'll make a movie that will be so awesome, that you will be very happy to have supported it and to have special NFTs that show your early support. Join us in the making of Calladita and let’s make history together!

So Miguel is funding his project via NFTs that have four different tiers and benefits for those that purchase and hold the NFT. Through using a Web 3.0 approach Miguel is building a community that is invested in and proud to actively promote and contribute towards the goal of advancing the elimination of gatekeeping in art. 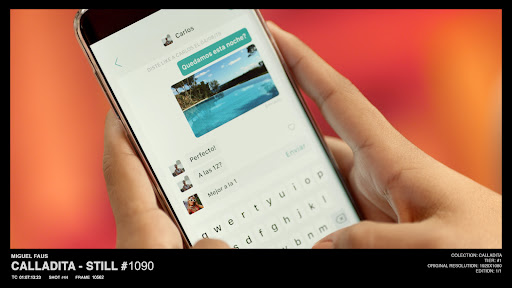 CALLADITA is the genesis NFT collection by filmmaker Miguel Faus. It comprises 2.400 NFTs organized in 4 Tiers. All of the proceeds from these NFT sales will go towards funding Miguel’s first feature…
Created by calladitafilmView on OpenSea

In Their Own Words with... Miguel Faus

Miguel’s project is extraordinary and this is just a little taste of the future that Web 3.0 can bring to filmmaking. I suggest you dive in if you can. Now let’s get to the fun stuff…

CALLADITA is a feature film that Miguel Faus has been working on for a few years. It is based on a short film of the same title that Miguel wrote and directed in 2019, which has been selected at many festivals around the world (including Palm Springs Shortfest and the London Short Film Festival), and has been acquired by VOD platforms like HBO Max (U.S.) and Filmin (Spain).

Logline: Calladita tells the story of a young Colombian woman who works as a domestic worker in a summer mansion in the Costa Brava. While the family she works for enjoy their lush holidays, she spends her days cleaning and serving them. Until one day she meets Gisela, the maid of the neighboring house, and with her she will learn that maybe she can also find her own ways to enjoy the summer.

A: I think the hardest part has been reaching our audience in an NFT ecosystem that is highly saturated, with hundreds of projects launching each week, and people’s attention spans completely fragmented. But once we’ve reached them, we’ve found people are very receptive to this innovative project using NFTs for something new and interesting. Having the short has helped in people understanding what the film is about, and being able to see a proof of concept. We haven’t focused much on explaining the crypto part to non-NFT people, to be very honest.

Q: CALLADITA is based and inspired by an amazing short film you created, with the same name, what’s one small problem you overcame, with creativity, while filmmaking.  Was there a tough shot, a character that needed cracking. How’d you overcome it?

A: There’s a scene where a character has to do a golf swing, and the actor hadn’t picked up a golf club in his entire life. I discovered this the day before the shoot, so I overcame it by just giving him a quick lesson, and we were very lucky because he was a super talented student :)

Q: What’s one of your favorite sequences in a film? Why?

A: Well that’s a very tricky one, and I always remember entire films better than sequences, but the opening scene in Hitchcock’s “Rear Window” comes to mind. His command of the camera and the story, and his ability to establish the whole plot in one short scene with no dialogue, is absolutely masterful.

A: There’s a new spot in Barcelona called Mantequerías Pirenaicas, and their tortilla de patatas will change your life.

Thanks for reading The Elements of Producing! Subscribe for free to receive new posts and support my work.

For your security, we need to re-authenticate you.